PDM stands for Product Documentation Management or Product Definition Management and is assumed to be a description of the way we document or define our Products and their content in hardware and software, including computer applications needed.

LCM stands for Life Cycle Management and is assumed to be a description of processes needed for the development (anf often even the manufacturing) of our Products and the content in hardware and software in these. By Life Cycle in this context I assume  the Life Cycle of the Models, Options, Parts, Assemblies, Documents, Engineering changes and identities used for these as non-physical entities, or as I call these: "Nominal".

Most of the time LCM is confused with PDM and is assumed to cover all of it and includes computer applications needed.

An Enterprise developing and manufacturing complex Products with embedded electronics, will need a large set of functions/computer applications:

All of these systems will of course have to be integrated, at least to the level where they use the same definition for the same conception!

To have one system that will cover all of it is something I do not believe is possible or feasible.

A historic background to PDM with Volvo CE as an example.

I will use the story of the the evolution at Volvo regarding PDM and Bill of Material. I hope this will give you an understanding of what PDM and LCM is about.

I started working at Volvo fall 1958 as a Design Engineer at the Truck Engineering, so that is a practical point in time to start.

Volvo was at that time one single company consisting of different departments. It was about 10 years later that Volvo was divided in different companies within the Volvo Group.

Volvo trucks were developed at the "truck drawing office" that would be called Truck Engineering today. The same office were also developing bus chassis.

What was developed was documented on drawings and manual Part Lists or Bill of Material (BoM). The BoM were separate from the Drawings. The way we structured the BoM was based on the experiences learned at a trip to General Motors and other automotive manufacturers in USA in 1939 by the top executives of Volvo, Gustaf Larsson and Assar Gabrielsson.

In the early 60-ies, Volvo started to get computerized, starting with manufacturing at the truck plant and the car plant and of course economy. Powerful IBM machines were installed (IBM 1401 and 7070).
In 1967 Volvo decided to "computerize the Parts Lists" and the TI-project was launched with the Vice President Engineering Tord Lidmalm as top gun. The TI project was soon sucked into the bigger VIS (Volvo Information System) Project that consisted of 20 sub-projects.
We were 4 people making the core of the TI project, 2 with user background (Lennart Svensson and I) and 2 with computer background (Kai Honnér and Kurt Larsson).  Lots of people were added later when programming started and when migration were needed to get the application up and running.

In 1969 we were ready to start the migration to the new system "KD69". It was based on an IBM program called the BOMP (Bill of Material Processor) to be run on an IBM 360 computer and was in fact the only application that was installed of the entire VIS Project.
The KD69 system was updated using a lot of different forms. Engineers were filling in these forms which were sent to a group that scrutinized the forms and made corrections and additions etc. after which digital capture was made on tape encoders (instead of on punch cards). The tapes were sent to the computer center and run during night. The next morning we had a lot of output including error lists that had to be taken care of : new forms, new tape encoding and new computer run etc. But this was regarded as very modern and rational.

Just after we had installed the KD69, IBM released their IMS (Information Management System). Volvo had participated in the Beta Tests of this. IMS incorporated data bases and it also had the possibility to use CRT terminals for data retrieval and for input.

KD69 had only paper for input and for output. Parts Lists were produced by KD69 in large quantities and had to be copied in even larger quantities. You had to keep track of revisions of the Part Lists to be sure you had the right ones.

It soon became evident that it was possible to have Real Time Applications where you always had the latest version and all previous engineering changes available when needed.
At Volvo Trucks, KOLA (Konstruktion Lastvagnar) was the next project moving the KD69-info to a next level. It started slowly in 1972 but gained speed in 1976 and was installed in 1980. Migration was painful since they found no possibility to do in a mechanized way.
KOLA was re-engineered in 1997 and is now the PDM application used throughout Volvo Trucks, Volvo Buses and Volvo Penta.
At Volvo Cars, KDP (Konstruktionsdata Personvagnar) was the application developed as a major enhancement of KD69. It was installed in 1981 and has been further developed several times since then. It has also been replaced to a certain degree but is still running.
Volvo BM in Eskilstuna (tractors, forest machines and construction machines) had been purchased by Volvo in the early 50-ies. In the early 70-ies a new rather simple application had been developed based on KD69 and IMS.

In 1978 Volvo BM decided that they need something better and the MF80 Project was launched. Within that project, the PROST sub-project was started in January 1979. KOLA was investigated as a possible application but it was rejected as being too complicated. Instead, the PROST project developed a similar application based in requirements specified within Volvo BM. First installation was done in March 1982 and the last installation within the project in May 1984 when also the migration was done, in one blow, in a mechanized way.

PROST was a Swedish application intended for Swedish companies only. However, as soon as PROST was up and running, there was a demand for Parts Lists in English. This was foreseen in the PROST project, so that was an easy requirement to fulfill.

In 1986 Volvo BM joined Clark Michigan and a new company was formed VME (Volvo Michigan Euclid) only 50% owned by the Volvo Group. PROST became the general PDM application with users even in USA. New companies were purchased: Zettelmeyer in Germany and Pel-Job in France. The company name, VME, was kept but now the acronym didn’t mean anything. The excavator company of Samsung in Korea was purchased in 1996 and the company name was altered again to Volvo Construction Equipment or VCE. Other companies have been purchased since then.

Since 1984, PROST has been continuously enhanced to meet the requirements as Volvo BM grew to a complete group of manufacturers located all around the world.

The number of users was still in 2012 above 2500 with around 5 million transactions per year.

In 1995 we started to look for a replacement for PROST. It had become evident that there would be a need for integration between CAD (geometrical data ) and PDM (verbal and numeric data). Still we have no full integration between the two application worlds. At the start of CAD in 1985 there was no need: few drawings on CAD and even fewer geometric models. 30 years have made a great difference. Also, the Products have become more complicated and require a handling of Options that PROST is not really capable of.

Many of the functions in PROST are not necessarily due for replacement but PROST is absolutely in need of a major overhaul/enhancement or replacement. IBM IMS is still a very good base for further development. However, it seems like the executives prefer an "out-of-the-box"-solution from a major PDM vendor using a "modern" server/client technique. However such a solution isn't a solution without a lot of adaptions and additions!  The chosen solution for VCE to-day is actually KOLA – again – but it may take some time! That idea eas later abandoned!

A PDM application has to be very versatile and flexible. It has to live through growth with new companies being added and integrated as owned or as partners. The PDM application will even have to be able to cope with sold companies where it has to be possible to extract all the information related to the sold company. Not always easy! Volvo BM had to do this when the tractor business were sold to Valmet. Volvo CE had to do this again when Euclid were sold to Hitachi.

This little story, out of the real life, tells quite a lot about which requirements that have to be fulfilled by a good and flexible  PDM application. It has to be able to cope with a dynamic environment:

The Extended Enterprise developing and manufacturing complex Mechatronic Products existing in a very global world.
Develop Products anywhere and manufacture them anywhere is a must requirement!

It is quite obvious that there just isn’t any PDM applications "out-of-a-box" that can meet the requirements at any industry that started development of PDM applications in 1967 and already have had most of the functions for many years.   What to-day's PDM vendors offer as new and modern, often lack several functions our users have grown used to. 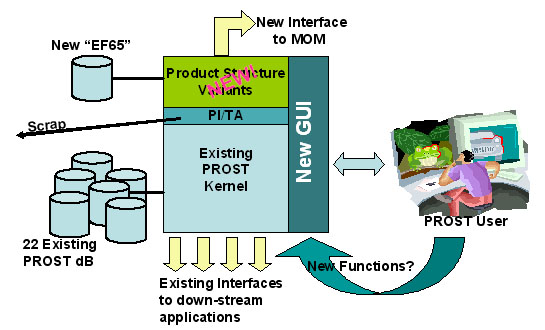 I tried to offer a viable evolution for PROST that would make a look-alike system to KOLA but it was impossible to get the executives interested. I did not have the credentials of a consultant from a "big iron".
The solution would have made it possible to run PROST in parallel with KOLA and to communicate with any down-stream application as is or, if so wanted, easily made it possible to migrate to KOLA with very small efforts. It would have saved millions for Volvo CE but the executives preferred IBM and Dassault implications – eh – applications.