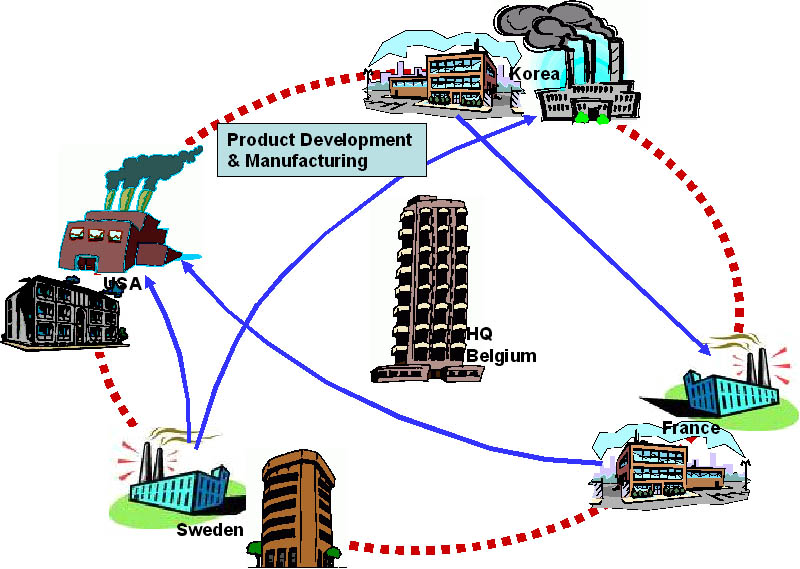 An Enterprise may be a single, autonomous company developing their own products, having them manufactured, marketed, and sold in only one location for the regional needs or it may be a worldwide conglomerate or group of companies or something in between.

They all need some kind of PDM applications to keep track of what they develop and produce for internal administrative reasons and for product liability and service reasons.

In my further descriptions I have assumed an international corporation operating on several continents, producing a diversity of complex (mechatronic) products. I have also assumed that the Enterprise operates as an ”Extended Enterprise”. This implies that the Enterprise has an intimate cooperation with Partners that act as if they were part of the Enterprise. Such Partners may for instance be doing part of the Product Development, Manufacturing, Sales or Spare Parts Operations. The Partner may even be another Company in the same line of business: Joint Venture. Even Franchised and Outsourced parts of a business is part of the Extended Enterprise.

Even a small monolithic Company may need PDM. The importance of PDM will vary with the complexity of their Products. The more complex Product, the more need of a PDM application.

If an Enterprise is manufacturing a variety of crowbars as their line of End-Products, it is obvious that it does not take much to describe these Products in a PDM application.

In the other end of the scale it is also obvious that it is extremely complicated to describe all the varieties of a large modern aircraft or a truck or a car and to keep track of all engineering changes occurring during the life of this product. It is not necessary to take Boeing, Airbus, GM, Ford or Volvo as examples. There are plenty of international companies around the world that develop and manufacture overly complex Products that need a set of elaborate PDM applications to document and follow up the continuous enhancements made to their Products.

We assume that the Products are made available to the customers in lots of varieties of which most are predefined and selectable from factory, and a few may be described as made to Customer’s Order. This is an extremely complicated area of PDM and is further described under the headings Variants and Configurators.

Explanation of our Model Enterprise.

The figure shows some Product Companies and the Plants where the Products are being manufactured. One of the Product Companies is a specialized Component Company developing and manufacturing components to the others. They all belong to the same Extended Enterprise often referred to as a Group (of Companies). Such a Group will typically have their Headquarters in Brussels or Amsterdam. Each Product Company is autonomous and is responsible to the Group Headquarters for their own result. Investments are decided on Group level. I assume that there is a Marketing organization that is coordinating sales through the Dealers.

There is a continuous strive to buy and add new Product Companies to the Group if they fit the picture: a certain range of Products specified properties and quality and with a certain market share worldwide. Typically, there are lots of talk about synergies in the press release when a new company is bought, or a merger is settled. However, there is often very little effort to integrate a newly acquired company with the rest of the Group. The investments for integration to achieve the synergies are hard to get. If there is any integration done at all, this will typically have to be paid by the new company.

I have assumed that the story of this Group started in Sweden with one Company manufacturing two different types of Products (Product Classes) and some components for these. At some point in time there was a merger with another Company and the Group was formed. The original company in Sweden was reorganized in several different Product Companies. After a while, other companies were bought. Typically, each Product Company had at least one ”home” Plant in which they manufactured their own Products. Sometimes they even manufactured Products for other companies.

Strategically, it was decided to have some ”hub” Plants serving each of the continents where our Group has their main markets: USA, South America and South Korea (as an example).

It is obviously so, that when you buy a new company, it is only sheer luck if they have any of the PDM, MRP/ERP or CAD applications already in use by any of the existing companies and plants within the Group. This is the critically important reason to develop PDM applications as a set of applications with well-defined interfaces based on an Object Model (ISO STEP AP214 or something close to that). 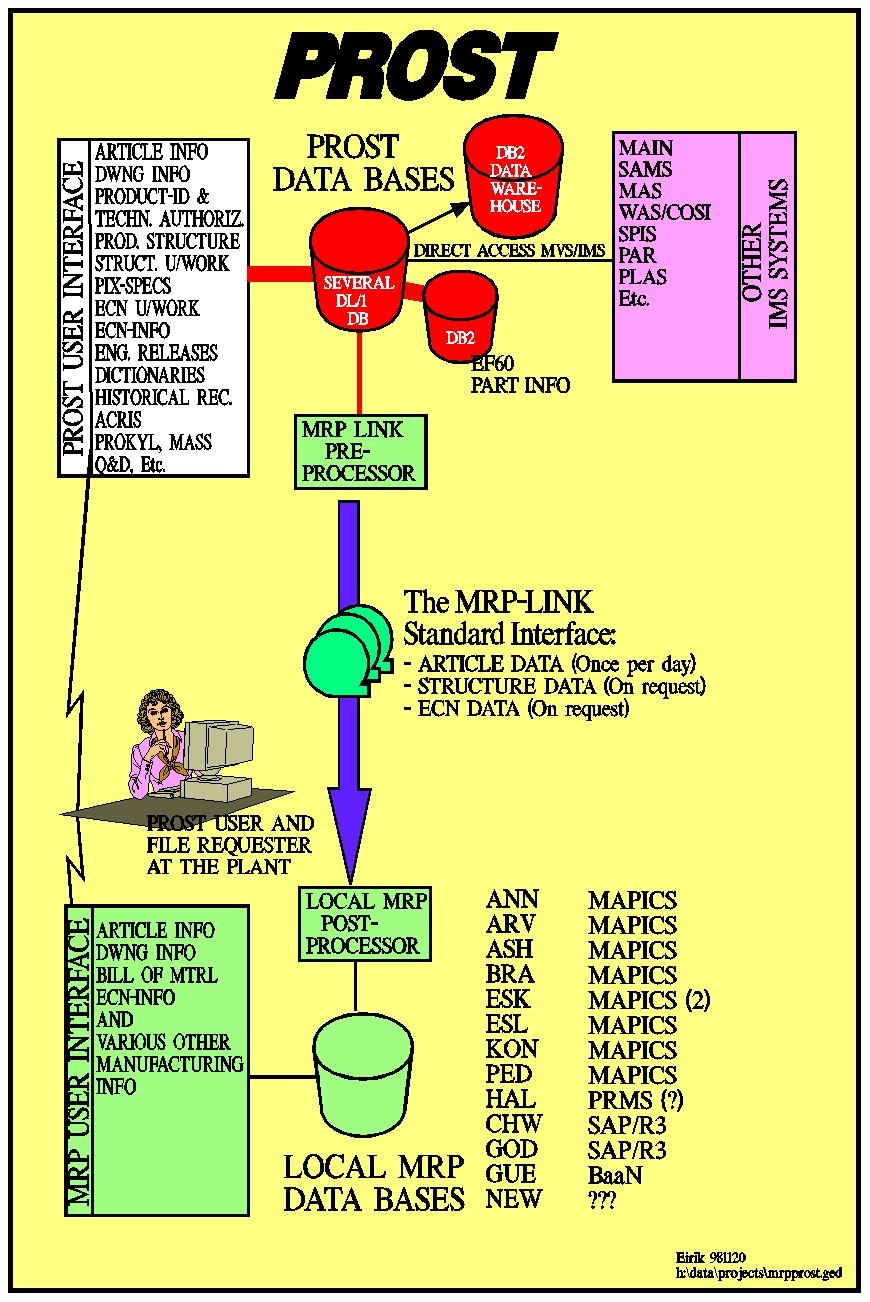 Volvo CE had a setup based on PROST: The MRP Link:
PROST and the local MRP applications at the manufacturing plants allowed
Products to be developed anywhere and to be Manufactured anywhere.

Such a setup is of course vital for the entire Enterprise!
This setup worked for verbal information and was even automated for certain manufacturing plants.